There is a lot to do around Colorado Springs, which is why people have been coming here to visit for over 100 years. You can't fit everything into one day, but a long weekend should suffice. It's fun for locals to visit some of these places, too, so it's not just tourists.  All of the major sites are within a few miles of town, so getting to them is fairly easy. 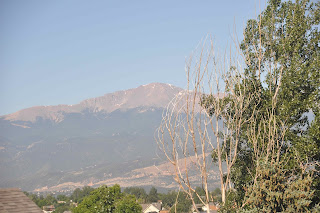 I covered Pike's Peak separately, because that is in a category all it's own. Just know that there are basically three ways to the top: driving, climbing and the Pikes Peak Cog Railway.  Some take the cog railway up and walk down, but that is an all-day adventure.  You see them huffing along, hours later, hoping to get back down before dark.  There are plenty of other hiking adventures if you wish in the area, and that isn't one I would choose on the spur of the moment. 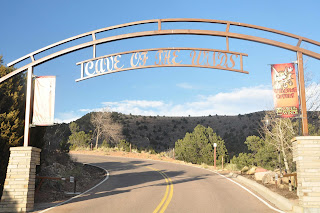 Across the highway from Pikes Peak is the  Cave of the Winds.  Folks who go down into caves call themselves "cavers" nowadays.  The general tours are terrific, but if you happen to know a guide, they can take you down to the really cool spots.  Lots of famous people visit the caves, a friend said she lead a tour with Bill Gates and his family.  Well worth a trip, the last time I went, I saw an aerial battle between a couple of eagles or hawks high above the cave entrance.  It's rough country, and once you get underground it is a lot of fun.  It also has the advantage of being very close to town for a major attraction.  The entrance is just off the road on the road west into the mountains.

Seven Falls is also on the usual list of places to see.  It is fun to see, though I wouldn't go out of my way to see it.  There are waterfalls, yes, and rugged beauty.  Probably its best feature is that you can climb up to a promontory and see out over Colorado Springs.  Of course, you can do that in lots of other places in the area, too.  Locals here like to go around Christmastime, when they have lights up and it really is a joy to visit.

The Cheyenne Mountain Zoo is much more a favorite of locals than most of the other places on this list.  It was started by Mr. Penrose a hundred years ago, and is actually a pretty good zoo. I think a lot of visitors figure they have zoos of their own back home and have to prioritize this one out of their busy itineraries, but it is worth a visit.  Built on the side of the mountain, the views are as much fun as the resident animals.  The giraffe house is always a favorite.  You will see a lot of local families there during nice weekends.  I've seen a lot of zoos, and this one compares favorably with pretty much all of them outside the truly extraordinary ones such as the Bronx Zoo. 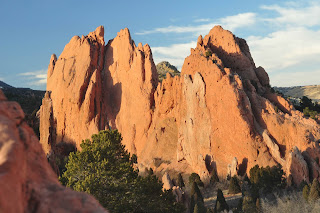 Garden of the Gods is the fancy name for some massive rock formations conveniently located near several main roads.  They were donated by their owner a hundred years ago with the understanding that they would always be open to the public.  Though there is the obligatory visitor center, there is no admission fee, you can just drive in, park, and walk around and admire them.  I do that every so often and it is a lot of fun.  You will often see climbers scaling some of the rocks, and if you catch the light right, they will appear to glow.  This should be a definite stop on any visitor's list. 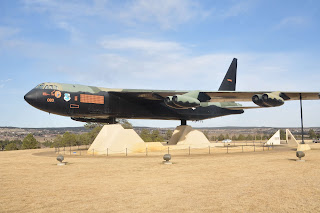 The Air Force Academy has a unique chapel that is worth visiting.  Unfortunately, as of the time of my writing, you must use the north gate to the base unless you have a military ID, which means a trek well out of your way up I-25.  Once you get there, though, there is lots to see.  Don't forget to stop by the mounted B52 near the north entrance, you will see it as you drive by.  Also, be careful, there are herds of deer roaming around freely here, and it is not unusual even for people who live on the base to run into them. 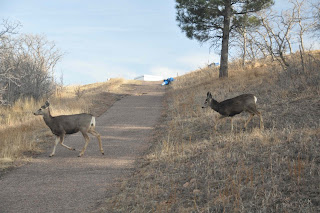 The downtown Colorado Springs area is not very impressive in my humble opinion.  I go down there as rarely as possible, which is usually when I get called for jury duty.  It is mostly government buildings and nondescript shops and restaurants.  There is a small park that is about two city blocks wide that is worth walking through once.  It is worth a quick stop to see the odd statue of General Palmer and the view of Pikes Peak.  After that fifteen minutes is up, time to go somewhere more interesting.

Getting a little further afield, a trip up into the mountains really is a must, at least in the Spring and Summer.  Driving up through the pass, the first town you will hit is Woodland Park.  It isn't much , a mediocre restaurants and a new Walmart (of course).  There's a great donut place there on your right, if Walmart hasn't put it out of business yet.  Rather than breeze through, it is worth stopping for a few minutes to take in the view of the mountains.  Back in the mid-2000s, there was a huge forest fire started by a lovesick woman burning her love notes that came perilously close to town and savaged the entire forest nearby.  It is supposed to take 100 years to grow back.  You can branch off to the north here, or continue west, which easily offers the more entertaining views.

There are various tourist attractions along the way that aren't all that interesting, but the best stops nearby are the Arkansas River and the ghost towns.  This area of the west is full of ghost towns, and various books will guide you to them.  The roads to them can be somewhat iffy, so make sure you are able to get to them.  The Arkansas River offers kayaking and all that at the Arkansas Headwaters Recreation Area, but I and folks I know here find the hot springs near Mt. Princeton much more enjoyable.  It is up in the Salida/ Buena Vista area.  It's fun to go in the winter and bathe in the river, once you find a nice hot spot you won't want to leave.

Dragonman's is a fairly well known paintball and shooting range to the east of town.  It is run by an old coot who is a lot of fun to shoot the breeze with in the visitor center.  Let me just note that a lot of people out here, and particularly those who visit Dragonman's, take their guns VERY SERIOUSLY. They dress the part, with guys in military fatigues wandering around caressing their shotguns as they head to the range.  It's funny standing near the edge of the range behind the berm and listening to the bullets wing out toward the distant road and houses.  If you are into guns, this is a must stop.

There are other attractions in the area that I have never visited, such as the Pro Rodeo Hall of Fame and the Western Museum of Mining and Industry, but if you are into that you probably know more about them than I do. A visit to Leadville is a good idea for anyone into mining, they closed the big molybdenum ("molly" to those who worked there) mine up there years ago and there are often reports that it is about to re-open, but I haven't heard anything lately about it.  Leadville is fun to visit because it has a strong libertarian streak and a nice restaurant or two, and all the locals in the Springs seem to have a relative or a friend or know someone who lives there.  Cripple Creek also is a fun stop if you want to gamble and visit the site of an old Grateful Dead song.