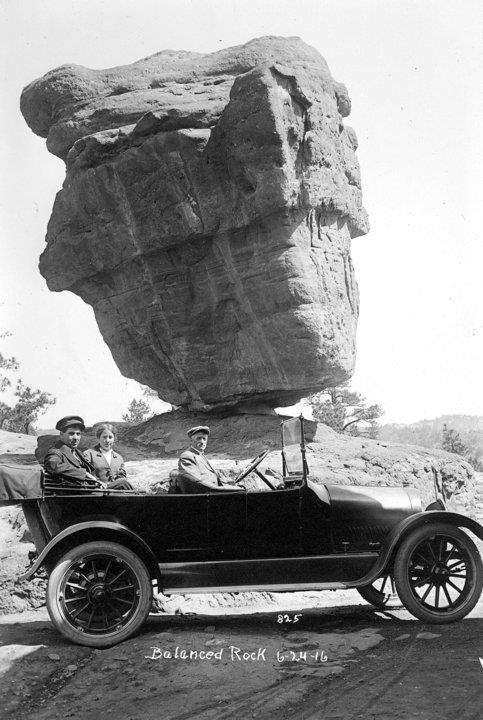 The more I learn about Colorado Springs' history, the more odd it seems.

A common view of this region of the world is that it was the "wild west" in the 1800s.  However, the available facts belie that stereotype.  In fact, Colorado Springs was founded by a rich man (General Palmer) who stumbled upon it while helping build the railway. He saw the area's potential and started a settlement a comfortable distance from the grimy plebians who already were working in the area. Palmer put his stamp on the town forevermore by building a swanky resort and bringing in all his society friends from the East Coast and abroad. You may think of gunfighters, rustlers and miners - think, instead, of monocles, tuxedos and taxis.

Arthur Penrose was a blueblood from mainline Philadelphia stock, a famous early German settler was a Baron or something, Palmer himself was a General - these were not gun-toting outlaws.  The Butch Cassidy gang did hang out in these parts, but Butch apparently had some pretensions of grandeur, and he may have felt comfortable hobnobbing with the aristocrats.

A dominant theme in surviving photographs of old Colorado Springs is the Antler Hotel. It must have been some kind of big deal, because they recorded that place like it was the White House or Mount Rushmore.


My working assumption is that the Antlers Hotel was the honey that drew in the blue bloods who took over ownership of the mines that eventually made Colorado Springs. The town has had all sorts of weird detours like that over the centuries.

Case in point: Nikolai Tesla somehow wound up here. He built his huge transformer near downtown, and somehow, in some way, through his electricity experiments managed to get rid of the locusts that invaded every year. Tesla deserves a statue downtown (hell, on Mount Rushmore) for that single feat alone, much more so than General Palmer on his horse. Think about it - the town was overrun with locusts every single year, making life miserable for every single person living here, and he got rid of them all - forever! One of the most amazing feats in all of history (I'm not joking), sort of like Saint Patrick driving the saints from Ireland, only for real. A true genius who inexplicably (except for historians who take the trouble to understand him) is treated as some kind of embarrassing freak by the locals (yes, there is a tiny plaque where his laboratory used to stand - the lab itself demolished, of course, to get rid of all traces of the freak).

I just point all this out because you, too, may have some misconceptions about the origins of Colorado Springs.  The miners lived up in the mountains - the royalty lived down in the Springs.
Posted by James Bjorkman at 6:46:00 PM