Thomas Jefferson bought this area from Napoleon Bonaparte in 1804 as part of the "Louisian Purchase."  Jefferson sent Zebulon Montgomery Pike to find out what the United States had bought.  Pike spent 1806-1807 trying to find the headwaters of the Arkansas and Red Rivers and surveyed the area.  He is credited with discovering Pikes Peak.  Though he tried to climb it, he was unable to due to waist-deep snow.  He had many adventures, including being captured by the Spanish, during which time he learned a great deal of valuable information about Mexico and its Spanish rule from his captors.  He published a popular account of his earlier expedition in 1810.  Pike died right after the battle of York (Toronto), Canada on April 27, 1813.

Contrary to popular belief, Colorado Springs did not spring to life when Jane Seymour was cast to play Dr. Quinn, Medicine Woman, that delightful '90s series set in the "frontier town" of Colorado Springs.  In fact, it stretches all the way back to the mid-1800s, when a railroad surveyor (and former Civil War General)  by the name of William Jackson Palmer decided to build a railroad south from Denver.  It turned out that the new railroad's intended first stop would also be his last, as he founded the city on July 31, 1871.

Palmer quickly changed from being a railroad man to a resort owner.  He was connected with money men in London, and soon a steady stream of very proper English types were headed to the shadow of Pike's Peak.  Palmer's resort was called the Antlers Hotel, and soon half the region was named after him, including Palmer Lake, Palmer Divide, Palmer High School, Palmer Beach, Palmer this, Palmer that, and, most importantly, the iron statue of him that still stands downtown.

Palmer's aristocratic manners are important because he sited his town a little east of where the real action was in those days.  Closer to the range (all the mountains you see from the Springs are known collectively as "the front range") was your typical boozing, wenching and gambling mess known as Colorado City (now known as "Old Colorado City").  Palmer avoided the riff raff and by buying up all the land between his resort and their den of iniquity, which later provided a nice, clean zone for expansion of the city westward.

Colorado City did have a purpose.  It supplied the pickaxes and carts for mining going on over the mountain in South Park.  It also processed gold found up at Cripple Creek.  Palmer's railroad, which never made it to its intended destination of Mexico, proved mighty useful in hauling all this dug-up wealth back east.  Palmer is a classic example of a fellow lucking into an economic bonanza beyond his wildest initial dreams. 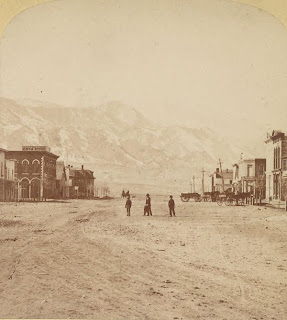 Palmer's nice friends who didn't want to associate with dirty miners managed to stay well clear of them.  They built all of the old stone buildings that survive to this day in the downtown area in what was then open scrub land.  In fact, they built such nice buildings that ultimately the county seat moved there in 1873, thus beginning the long, slow, sad decline of Colorado City until its outright annexation into the Springs in the early 20th Century.

The good times kept rolling for Colorado Springs because them thar hills were full of all sorts of wealth-making bounty.  A fellow named Winfield Scott Stratton developed gold mines in the Cripple Creek/Victor region in the 1890s, and the entire region prospered.  Stratton, incidentally, was an early day Warren Buffett, living in a very modest Springs home despite his vast wealth.  He donated much of the land in the downtown area that solidified the town as a regional center. Spencer Penrose also became fabulously wealthy from the gold rush and established all sorts of things that often later bore his name, such as the current Penrose-St. Francis Medical Center, the Broadmoor hotel, and the delightful Cheyenne Mountain Zoo.

There were still plenty of minerals left to dig up in the front range, but the gold mines in use soon played out.  Needing another source of revenue the townspeople cleverly turned to tourism.  Ironically for certain latter-day conspiracy buffs, the benefits of flouridation of water were first recognized in this very conservative town because of the natural flouride in the water.  There were all sorts of other supposed and real health benefits associated with coming out west, so the town continued to do well. 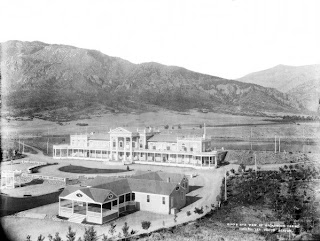 The tourism gambit was getting long in the tooth when the town got its next lucky break.  The Japanese attack on Pearl Harbor required the quick re-arming of US troops, and Colorado Springs' central location away from the vulnerable coasts proved to be an asset.  Soon, military bases were springing up all throughout the Rockies.  Things started sputtering again after the war, but then a new conflict, the Korean War, gave Colorado Springs a renewed usefulness as a troop center.  The United States Air Defense Command (which later became, essentially, NORAD) moved there in 1951, and President Eisenhower picked the town for the brand new Air Force Academy.  NORAD headquarters was built into Cheyenne Mountain in the early 1960s, and Schriever Air Force Base soon followed.  After that, the town's future was assured, the steady influx of government money proving a more than adequate replacement for the long-gone gold profits. 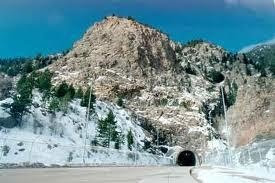