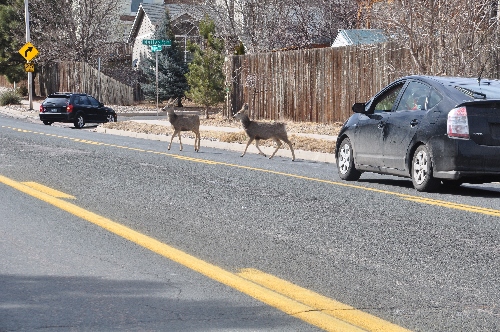 Please, before you leave this page, look at the video at the bottom!

Something that you quickly will realize is that driving here can be dramatically different than what you are used to  back home.  Now, I did not drive much back in New York City because there was little need.  The subway, the bus, the railroad and airports for longer trips usually sufficed.  But I learned to drive on Long Island and drove a lot, up to Boston, down to D.C., and the usual everyday commute into the City for a while.  That is mean driving, brother.  You don't get anything more frustrating than the LIE at  rush hour.

You undoubtedly are thinking to yourself that you drive all the time and know everything there is to know about driving.  You get in the car, you turn the key, you follow the rules of the road, and everything is normal.  I tend to agree that everything will seem normal, under normal conditions.  By "normal," I mean normal weather, normal roads and normal everything else.

The problem is, things can get abnormal in Colorado Springs in a hurry, and in ways you might never suspect until it is too late. There is nothing about driving here that can't be handled safely and with minimal inconvenience, but that requires experience.  Since you, as a visitor, don't have that experience, I will run through a few of the major issues you might encounter.

The main hazard, and certainly the most obvious one, is the weather.  Back east, winter clouds appeared some time in December and remained in place virtually unchanged until some time in March.  All well and good, you learn to drive under those conditions, with the occasional icy road and infrequent snowstorm.  I spent my teenage years on Long Island and did my fair share of winter driving.  Exercise a little caution, avoid sliding on the ice, and everything is fairly easy to handle.

Winter driving in Colorado is completely different.  You literally will see all four seasons here in a single day.  It will snow overnight, you will drive to work on icy roads, and you will be bundled up like an Eskimo.  Come out for lunch, and suddenly the sky has cleared, the sun has come out, and it's like springtime.  Later, on the drive home, you will be sweating and opening the car windows for a little relief as it turns into a nice, summer day.  Shortly before dusk, though, it will rain, and the autumn breeze will move in.

That is how changeable the weather is out here.  I am not exaggerating.  Conditions can change almost as quickly as the time it takes for the clouds to pass by and the sun to come out.  And that, perhaps, is the most dangerous aspect of driving out here, because you often find yourself shifting between extreme conditions and normal ones.  But what appear to be normal conditions can still be extreme, you just won't realize it until your car spins out of control down a hill and slams into five other cars.  And, yes, that happens, there are the videos on Youtube to prove it.

The number one mistake visiting drivers make is that they drive too fast.  Simply because your car has traction and can go a normal, nice-weather speed does not mean you always should.  The easiest way to slide out of control is to drive at the speed limit when the ground looks normal but still is recovering from an overnight freeze or snowfall.  Round the wrong corner or cross the top of the wrong hill and you will hit black ice that simply shouldn't be there - but is.  Even if you go slow you can run into problems.  I once was driving on the highway - the Interstate up to Denver - on a snowy morning, and I hit some ice and my car swung 180 Degrees.  Yes, I wound up pointing in the opposite direction of travel and was thankful that I didn't flip over.  Thankfully, conditions were so bad that following traffic had plenty of time to avoid my car.  Please, if conditions are bad, just because they look fine later in the day or even the next day does not mean they are normal.  Exercise caution.

Another mistake is not leaving enough room between your vehicle and the ones around it.  The bigger the cushion you give yourself, the less likely you will be of running into some other car.  All too often, you will be cruising down some main road, the road nicely plowed and the roadway black and looking normal, and come up behind some other car at a traffic light.  Hit the brakes - and nothing happens.  That roadway that looks so normal and which simply can't, positively can't be covered with ice, in fact is so full of black ice that you have no traction whatsoever.  The most annoying aspect of such situations is that, indeed, in another hour the road will be normal and nobody will even remember that there was a storm or ice on the road.  You, however, will be responsible for major repairs to two cars and a job that you missed because of your careless driving.

Motorcyclists have their own set of problems.  There is a lot of gravel on roads in the mountains.  It is fairly common to hear stories about visiting motorcyclists who, yes, took a turn too fast and paid for it with their lives.  What looks normal from 100 yards away as you careen around mountain roads at normal speed can instead be as tricky as winter ice.  Until you build up that experience, best to take it easy and practice your safe driving skills.

Another hazard that you won't find in the big city is wildlife.  In this case, I am talking about the four-legged kind.  Even locals have trouble with this.  I can remember a life-long resident of the mountains who showed up at my door one night with her hood bent back and bumpers and fenders in a mess.  Turned out she had been driving out at the Air Force Academy - which is full of lonely, dark roads - and run into a deer.  She didn't even get to keep the dead deer for food, the base police confiscated it.  While you may find the thought of seeing the occasional deer by the side of the road amusing and charming, that is not what I am talking about.  There literally are herds of deer all around the Springs who will be hidden in the trees until you drive up, and only then decide to cross right in front of you.  I have even seen herds of deer deep withing Colorado Springs itself.  They have no fear and consider the roads their territory.  Hit a deer and you well could total your car.  Keeping an eye out and keeping your speed low when driving by trees or anywhere else they could be hiding is a very practical idea that some day will keep you out of a lot of trouble.

One final note.  When driving in the mountains, the roads are clear and straight, and the prairie can stretch endlessly out beside you.  Perfect visibility, perfect weather, and you are in a hurry.  Let me give you a piece of advice that is certain to keep you out of trouble: if you are thinking of speeding along without worrying about the speed limit, think again.  Every so often on those roads there will be innocuous little signs in the middle of nowhere saying that the speed limit is now 40 miles per hour.  "Harumph," I can just hear you say, "There's no danger, this all looks find, I'll just edge her down to 55 and everything will be fine."  Well, wrong, bucko.  Those signs are there precisely to catch visitors who don't take them seriously.  They are there because there is some nothing-little crossroads town, one trading post, a gas station and little else besides that sheriff hiding behind someone's house.  And he will catch you and you will be lucky to just get off with a ticket.  A friend once was towing a trailer through one of those speed traps, got stopped, and had to have someone come and get her because the officer wouldn't let her leave without proper running lights.  So, you don't just have to worry about the four-legged animals, as the two-legged ones can cause you tremendous difficulty as well.

This really is only a partial list.  I haven't even talked about the hail that will strike in July, or the winter white-outs that will cut your visibility to zero, or the dirt roads where the danger of becoming "high-centered" looms.  But if you take it easy, give yourself time and space to maneuver out of dangerous situations, and follow the rules, you stand a good chance of coming through even the most dangerous conditions in good shape.

At this point, if you made it this far, you might be saying to yourself, "This guy is being dramatic.  Accidents there happen as infrequently as anywhere else, and I'll be fine."  All right, I will make one last attempt.  Below is a video of people who drive these streets every single day. One light snowfall - I remember it, it wasn't really all that bad - on a normal street in the heart of Colorado Springs, maybe ten or fifteen minutes from downtown. It really isn't all that steep, especially for around here. Look what happens: